If you are reading this, I’m going to assume that you are interested in adult entertainment. You’re a model, a photographer, a website producer, a cam-performer, a sex worker, a fan or a devotee of kinkiness and erotica.

Twitter is pretty good for this. Pithy tweets, actual conversations, and the ability to post pictures and videos for people to share and enjoy. And up until now, Twitter has been pretty good at sticking to their “free speech means adult entertainment is OK on our platform” principles.

Unfortunately, if you’ve been around a while, you’ll know that any monolithic platform run by one company is one CEO decision away from the Pornocalypse. First they mark everything as “sensitive” or “NSFW”. Then they silently censor it or move it down in search rankings. Then, when they’ve got erotica all corralled in a nice little area, they can just cut it completely.

Now I don’t KNOW if Twitter will do this. But I’ve been on enough platforms that have done it in the past that I’d rather not trust to luck. Paypal, Google AdWords, Patreon… I’d like to be a little bit more prepared this time around.

Which is why I started looking around for alternatives. I think I’ve found a decent one, and I think you should be on it too. It’s called Mastodon and it is like Twitter but based on open-source code and is distributed.

OK, five minutes is just to set up your Mastodon feed, echoing your Twitter feed. It’s getting followers to sign on and follow us to assemble a critical mass that will be the hard bit. That’s why I’m posting this in the first place. The sooner we start, the better chance we have of staying ahead of the curve.

NOTE: When you sign in after verifying your email, you need to log in with email address, not the username you chose for the instance. This is annoying.

Mastodon is Distributed. What that means is that you can run your own server, called an “instance” which communicates with other instances (“federated”, in the jargon). They company can’t shut you down, because there’s no one central company in control of the servers. With enough people running instances which talk to each other, you get a look-and-feel very like Twitter, but without the “CEO decides to cut porn today” risk. It runs on open-source protocols. Each instance talks to other instances to build up a social network, rather than having Big Brother at the top snooping down. Privacy is better protected, more under user control, up to and including running your own single-user instance with no-one else having ANY privileged admin access to your private data.

There’s got to be a catch, and there is. Right now it is tiny. The main instance, https://mastodon.social/about run by the dev who is developing the system, has only got 136,000 people. Some of you may have that many followers on Twitter. Right now, you probably won’t get NEW customers from Mastodon.

If one day you lose your twitter account for one nipple slip too many in your profile, how will your fans be able to reconnect?

If you’ve started posting on Mastodon, and encouraged your fans and followers to come with you, you’ve got a ready-made fallback. The platform isn’t perfect and this may not work. But it’s better than sitting around waiting for the axe to fall on us AGAIN from social media companies.

I figure it is worth five minutes.

It’s super-easy. The first thing you need to do is to sign up to some Mastodon instance. Which one?

If like me your main publicity tool on social media right now is Twitter, you may not want to curate another feed on another platform. Fortunately, you can set up automatic cross-posts between your Twitter feed and your Mastodon.

Go to https://crossposter.masto.donte.com.br/. Log in with your Twitter and with your Mastodon. Set to cross post. You can do it so tweets appear on your Mastodon, or vice versa, or both. Set it to ignore retweets, replies, etc. for a clean feed. 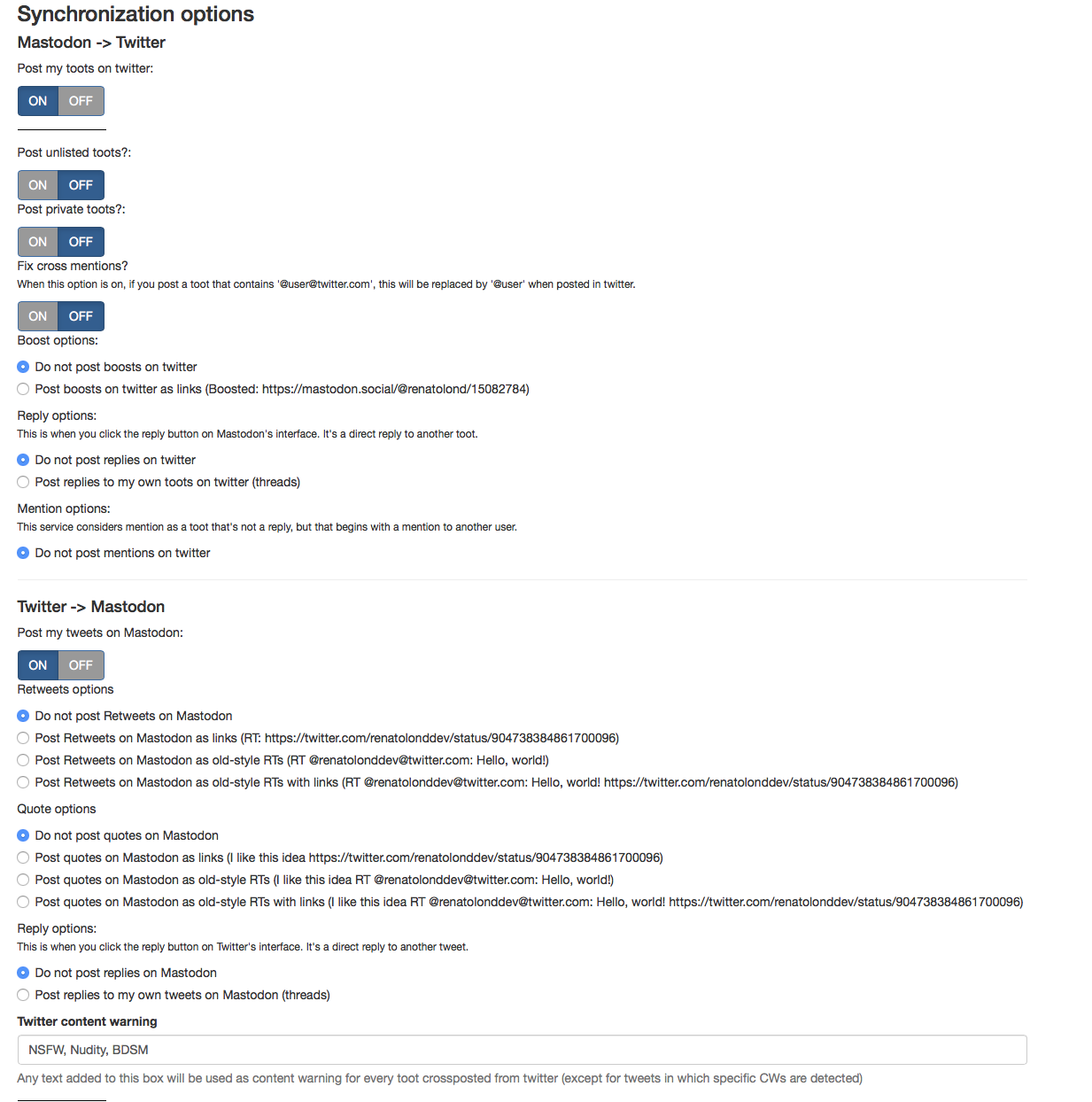 Mastodon has a content warning system, one for text and one for pics.

For pics, the easiest thing is just to set Preferences -> Always mark media as sensitive in your Mastodon control panel.

I gather that will make it more likely that our posts will be widely shared and our instance happily federated by other admins.

The most common recommendations seem to be Amaroq (iOs) or Tusky (Android).

Of course you can just use it in a browser, which is what I do. (So I can’t speak for the above apps personally).

This will grow the network and get us towards a critical mass. But more importantly, it means if and when Twitter gives you the chop, you’ll already have at least SOME of your followers up and running and ready to keep in contact on a new platform.

Follow a few admins and other producers. Post with hashtags (because that’s how search works on there).

I got all this set up from scratch in about 24 hours, including my own instance and a bit of reading around to understand how it works. I put this post together so the most important info is in one place so you don’t have to go looking.

I have no idea if this platform will have any longevity, but it has got a lot to recommend it and I figure it is worth a go. Especially since getting an “echo feed” of your Twitter onto Mastodon is literally a few minutes work, tops.

You find other people by their handle, which is (@)Username(@)instance. So I am
@RestrainedElegance@kinkyelephant.com
for example.

When you get in, the interface is Twitter-like. (And even more TweetDeck like, if you’ve used that).

If you are on your own instance, you need to start following people on other instances to get “federated up”. Google it- basically follow a few admins of other instances, and tell your fans. If they sign up and follow you from a big public instance, job done.

Annoyingly, right now there’s very limited scheduling facilities for queued posts. There’s one in beta but it doesn’t allow pics yet. But while we’re still allowed on Twitter we can use their queued tweets to schedule stuff via cross-posting which is a workable solution while we build followings. But at least they’re working on it.